A Role for Nutraceuticals in the Treatment of Migraine: A Chat with Paul Durham

“I don’t think nutraceuticals should ever replace medications, but rather can be used as supplements to potentially enhance the effectiveness of medications and to modulate a hyperexcitable nervous system. Nutraceuticals provide another option for managing migraine, but there is the additional benefit that eating more healthily and incorporating nutraceuticals is to take ownership of your own health.” —Paul Durham

Paul Durham, PhD, is distinguished professor of biology and director of Missouri State University’s Center for Biomedical and Life Sciences. His research takes a multidisciplinary approach to understanding migraine and treatment for this disorder. A major focus of his work is to understand the mechanisms of novel drugs and nutraceuticals for migraine treatment, primarily using animal models.

In this Migraine Science Collaborative interview, Durham chats with freelance writer Fred Schwaller about his view of migraine as a systemic disorder, a role for nutraceuticals in the treatment of migraine, and much more. The interview has been edited for clarity and length.

Your research takes a multidisciplinary approach to migraine and its treatment. Why is it important to study migraine in this manner?

Migraine is a complex disorder. Many different genes, pathways, and signalling molecules can contribute to the underlying pathology to promote a hyperexcitable nervous system. While it has a major neurological component, migraine must be viewed as a systemic disease since dysfunction in other systems such as the immune, digestive, or cardiovascular system is likely to contribute to the migraine phenotype.

If you’re only targeting one aspect of migraine pathology, especially in patients with more frequent or chronic migraine, with treatments like analgesics, then this is not likely to alleviate all the symptoms and improve the patient’s quality of life. For example, if a clinician prescribes only analgesics to reduce the severity of the headaches, it may not help alleviate other bothersome symptoms like photosensitivity. 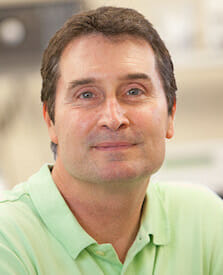 It’s about trying to treat the patient as a whole and helping them take steps to reduce the frequency and severity of their attacks. In the clinic, doctors should be asking patients about their diet, sleep, exercise and life routines. The daily life and habits of migraine patients hold key information about what is triggering their migraines. For example, someone’s diet could actually be making their migraine worse, so patients need to be educated about healthy lifestyle choices.

Could you go into more detail about how migraine is a systemic disease?

The systemic aspect of migraine comes down to allostatic load. By that I mean all those things that stress your systems and increase the risk of migraine. These are risk factors like insufficient or poor-quality sleep, a lack of exercise, a Western diet, or high levels of stress. Increased allostatic load from these factors promotes and helps maintain a hyperexcitable nervous system that is more susceptible to migraine triggers.

Stress is a major factor that increases allostatic load in modern society. Social media and continuous updates from around the world have contributed to people feeling more stressed about the future. I do an exercise with my students where they track daily stress levels using wearable devices like Fitbits that track spikes in their heart rate. The students see many spikes throughout the day, usually because of daily triggers like viewing a social media post or receiving a negative email or text. These frequent, daily, fight-or-flight sympathetic nervous system responses that increase allostatic load cause a change in our stress-response axis and result in an imbalance. We discuss ways to activate their parasympathetic nervous system by taking deep breaths, taking a walk, or watching something that is humorous to help restore nervous system balance.

A lot of it had to do with my upbringing and the famous statement by Hippocrates, the father of Western medicine, who said, “Let food be thy medicine.” It is better to prevent disease than to treat disease. I really owe the credit to Dr. Roger Cady since he was the one who told me about a group of indigenous people who consumed cocoa as a drink on a daily basis and had low risk of cardiovascular disease or other types of inflammatory diseases. Because of that dinner conversation with him, I decided to study the effects of cocoa in treating migraine and temporomandibular joint disorder [TMD], both of which involve activation of trigeminal nerves and inflammation, and are comorbid conditions.

We found that cocoa worked to inhibit CGRP [calcitonin gene-related peptide] release in vitro without toxicity, which in vivo blocked trigeminal nociception in rats. Cocoa contains the active compound beta-sitosterol, which is the same anti-inflammatory compound found in aloe vera and pumpkin seeds. This initial work led us to study how nutraceuticals, and dietary changes in general, can help alleviate migraine symptoms.

What else did you find?


In addition to cocoa, our research has shown that several different nutraceutical approaches can inhibit nociceptive signalling and enhance descending pain inhibition pathways in the spinal cord that are activated by endocannabinoids, endorphins, and opioids.

We discovered that inclusion of a commercially available grape seed extract [GSE] as a daily supplement in drinking water was effective in both chronic and stress-induced migraine models in rats. Somewhat surprisingly, we found that GSE could inhibit trigeminal nociception even if you began supplementation two weeks after the development of trigeminal sensitization.

Chicken bone broth was another supplement we found to have therapeutic effects. Dietary inclusion of chicken bone broth in the drinking water was effective at reducing pain in a model of temporomandibular joint pain and at reducing signs of neuronal sensitization in the spinal cord. We also found that supplementation was effective at inhibiting trigeminal sensitivity caused by early life stress.

What role can nutraceuticals play in treating migraine?

As I mentioned, I like what Hippocrates said: “Let food by thy medicine.” Nature has provided us with many natural products that have medicinal properties to modulate all of our systems.

I don’t think nutraceuticals should ever replace medications, but rather can be used as supplements to potentially enhance the effectiveness of medications and to modulate a hyperexcitable nervous system. Nutraceuticals provide another option for managing migraine, but there is the additional benefit that eating more healthily and incorporating nutraceuticals is to take ownership of your own health.

It is usually easier for a person with migraine to add supplements than to find time to exercise or drastically change their overall diet or sleep habits. We need to educate patients about the benefits of making healthy dietary choices to improve their gut health and quiet their nervous system naturally, rather than just relying on pharmaceuticals.

In future research I would like to combine nutraceuticals with pharmaceuticals to see if we can lower the dose of drug required for efficacy and minimize negative side effects – for example, can we use opioids or cannabis plus a nutraceutical, since lower amounts of the drugs would not likely lead as readily to addiction. We need more studies, especially in humans, to demonstrate the efficacy of these approaches.

The problem is that pharmaceutical companies generally don’t fund nutraceutical studies, and nutraceutical companies don’t have the funding to support large human trials. These types of studies could be funded through the National Institutes of Health. Nutraceuticals function to help restore and maintain healthy systems rather than specifically treating a disease and thus can function as a complementary approach for managing migraine.

Where do you see the migraine field at the moment? What does it need to do to improve?

I would like to see a more balanced approach that includes pharmaceuticals but that also highlights the importance of alternative strategies and educates patients to better understand what they can be doing to reduce their dependency on medications. Since people with migraine have a genetic predisposition for a hyperexcitable nervous system, they need to be aware of the things in their environment or their lifestyle choices that increase the risk of an attack.

I would like to see the migraine field and pharmaceutical companies advocating for the use of nutraceuticals as a complementary approach to migraine treatment. But this is a major challenge for healthcare systems, especially systems like in the US.

I’d be keen to set up a new migraine meeting that isn’t primarily funded by pharmaceutical companies – one that gives more open platforms to clinicians and researchers who are more open to the idea that migraine is a systemic disease.

What are the next questions you want to tackle?

We have initiated new studies to investigate changes in the auditory system, in a preclinical migraine model, since sensitivity to sounds, including phonophobia and hyperacusis, is commonly reported as a most bothersome symptom of migraine. While our research is focused on preclinical migraine models to understand cellular changes, the research organization Clinvest Research, under the direction of Ryan Cady, has recently initiated human studies in migraine patients, which have found changes in the auditory system in many migraine patients; Ryan was a grad student in my lab and is the son of Dr. Roger Cady, a good friend, and we still collaborate on projects and share ideas. We are excited to continue this line of collaborative research, which has not been a primary focus even though changes in the auditory system would significantly decrease a patient’s quality of life.

Understanding the Links Between Migraine and Vascular Health
Mindfulness and Migraine: Is There a Link?
A Better Way to Classify Migraine: Linking Symptoms to Patterns of Brain Activity
A Role for Nutraceuticals in the Treatment of Migraine: A Chat with Paul Durham
More Than Meets the (Human) Eye: Headache Researchers Use Facial Detection Software as an Automated Readout of Pain in Mice