Migraine Changes the Structure of Neurons in the Brain – and Quickly, Too

A new study in mice shows that migraine changes neuronal complexity in pain-processing regions of the brain – within hours.

One of the fundamental findings from the neuroscience field over the years is that neurological conditions drive neuronal plasticity – the ability of the nervous system to change in response to experience or injury. Synapses rewire, axons and dendrites restructure, and the overall complexity of neuronal pathways changes with disease – including migraine.

But where in the brain does migraine cause these plastic changes? And are the alterations seen during migraine different from those of other pain conditions? New work from Amynah Pradhan, at the University of Illinois at Chicago at the time of the study but now at Washington University School of Medicine in St. Louis, US, and colleagues now brings fresh insight into these questions.

The study uses animal models to show that migraine drives changes in neuronal complexity in the thalamus and periaqueductal gray (PAG), two brain regions involved with sensory processing and with pain becoming chronic. Neuronal complexity refers to the length of neurons along with the number of neuronal processes, including axons and dendrites.

The research also shows that changes in neuronal complexity are unique to specific pain conditions. In this case, again in an animal model, the plastic changes caused by complex regional pain syndrome (CRPS) differed from those of migraine.

“The idea that structural reorganization underlies the migraine-associated pain condition continues to be an area of emerging study. If structural abnormalities contribute to circuit dysfunction, then therapeutic strategies that focus on normalizing neuronal structure may help to improve pain outcomes,” added Tan, who studies neuronal plasticity but was not involved in the current investigation.

For the paper, Pradhan received the American Headache Society (AHS) 2022 Harold G. Wolff Lecture Award for the best paper on headache, head or face pain, or the nature of pain itself, and presented the research at the 2022 AHS Annual Scientific Meeting in Denver. The paper was published online shortly before the meeting in the journal Headache, on June 8, 2022. (See related MSC podcast with Pradhan here.)

Pradhan’s earlier work, published in 2021, showed that decreases in neuronal complexity were present in animal models of migraine. What’s more, inhibition of histone deacetylase 6 (HDAC6), a protein that destabilizes microtubules, restored neuronal complexity. (Microtubules are cylindrical protein structures that help form the cytoskeleton – the network of protein filaments in the cell cytoplasm that give cells their shape and internal organization. Neurons need microtubules in order to make connections with other neurons.)

“This present study is a follow-up study. We aimed to look at which brain regions involved in pain processing were changed due to migraine. We were also interested to see if the changes were distinct from those caused by a different kind of pain, CRPS,” said Pradhan. CRPS is a form of chronic pain that follows injury or surgery and most commonly affects the limbs.

Next, a day after the final NTG treatment, the authors used Golgi staining, a technique used to stain neurons, including their neuronal processes, which can then be visualized with a microscope. This allowed the team to look for changes in neuronal complexity in several regions of the brain known to be involved in chronic migraine.

The investigators set their sights on brain areas involved in sensory processing, including the ventral posteromedial nucleus (VPM) of the thalamus. The thalamus is best known as the “relay station” of the brain, and the VPM in particular is important for relaying sensory information from trigeminovascular neurons to higher levels of the brain. 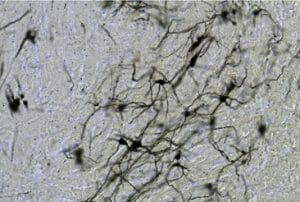 Also of interest was whether migraine changed neuronal complexity in brain regions that drive the affective components of pain – the unpleasant or aversive aspects of pain, including the emotional response to pain. In this case, the researchers turned to the amygdala, a region known to drive affective responses to pain and migraine. They also examined the caudate putamen, another brain region that is also important for processing pain.

The results showed moderate changes in neuronal complexity in the VPM, reflected by an increase in the total number of nerve cell branches, in the animals that received NTG. There were no changes in the length of the neurons, nor were there changes in the number of intersections amongst dendrites, the latter finding based on a technique called Sholl analysis.

However, the team found no significant changes in neuronal complexity in the amygdala or caudate putamen.

Next, the team turned to a different migraine model, in this case the cortical spreading depression (CSD) model. CSD is a brief wave of increased electrical activity, followed by a longer wave of decreased activity. It is thought to underlie the migraine aura.

To create CSD, the researchers applied potassium chloride for one hour to the surface of the cortex in anesthetized mice; this has an inhibitory effect by making neurons less likely to fire action potentials. Then the brains of the animals were collected for Golgi staining.

This time, the team looked at the ventrolateral periaqueductal gray (vlPAG), a region of the midbrain that integrates the affective and sensory components of pain, and that also plays a role in endogenous pain modulation (the body’s own ability to dampen pain). Here, there were significant changes in neuronal complexity, including decreased branching and decreased length of neurons.

These findings show that the phenomenon of migraine aura in the cortex can drive changes in the cytoarchitecture of subcortical regions like the vlPAG. (Cytoarchitecture refers to the structural arrangement of neurons.) Moreover, these changes are rapid, occurring after just an hour of CSD.

“Here, in the CSD model, we see that migraine decreases neuronal complexity, but in some cases migraine increases neuronal complexity, in brain regions involved in pain processing. Collectively, this shows that the cytoarchitectural alterations were more widespread than previously thought and may differ in their final alterations,” said Zachariah Bertels, first author of the study.

CRPS causes changes in neuronal complexity too – but different ones

The focus then shifted to a model of a different type of chronic pain, CRPS, to see if changes in neuronal complexity also occurred there, and whether they were similar to the alterations present in the migraine models.

To model CRPS in mice, the distal tibia was fractured in each animal, followed by three weeks of casting. Following removal of the cast, the mice showed persistent pain hypersensitivity that lasted for 20 weeks after the fracture.

The researchers saw decreased neuronal branching in the dorsal hippocampus, a brain region involved in cognitive function and memory, in the CRPS mice. This could reflect some of the cognitive impairments and memory deficits many patients with CRPS show.

Changes occurred in the vlPAG too. However, unlike in the CSD migraine model, there was increased neuronal complexity in the CRPS model, as reflected by an increase in the length of neurons.

“We did see differences in neuronal complexity in the CRPS model, but they were different changes compared to migraine,” said Pradhan. “The bottom line is that cytoarchitectural changes appear to be a hallmark feature of pain chronicity, and these changes differ for different types of pain.”

What was striking in the study was how quickly the changes in neuronal complexity took place during migraine – within an hour in the CSD model.

“This is fast. But it’s fast because neuronal complexity needs to change in response to signaling properties in the brain. It’s important to remember that cells in the brain are not static – they are constantly changing in response to inputs. I think this is a hopeful note for people who suffer from migraine disorders. If you develop migraine, the brain has changed rapidly and brought about the disorder, but there might be the possibility to reverse those neuronal changes and solve the problem,” said Pradhan.

Tan was also struck by the structural changes. He said that while the study does not speculate on how long these changes might last, one could imagine that with chronic migraine over months and years, more enduring structural changes may occur.

“Evidence in humans backs this up. Imaging studies have observed cortical thinning in migraine, and this structural alteration has been associated with pain chronification. In addition, other studies report that subcortical changes, including gray matter volume alterations, are more pronounced and persistent in chronic as compared to episodic migraine sufferers,” Tan said.

The current findings are also consistent with evidence from other pain studies.

“In the field of pain research, emerging evidence points to structural-functional reorganization as a potential mechanism of pain beyond just migraine,” Tan said.

“The big takeaway is that alterations in cytoarchitecture are possible mechanisms by which many chronic pain states function. Learning more about how these alterations occur is an important step in furthering our understanding of chronic pain pathophysiology and may lead to better, more effective treatment options,” said Bertels.