Editor’s note: This is the sixth in a series of interviews and podcasts with Migraine Science Collaborative editorial board members.

Amynah Pradhan, PhD, is the director of the Center for Clinical Pharmacology at Washington University School of Medicine in St. Louis. Previously she was an associate professor of psychiatry at the University of Illinois at Chicago. She investigates novel therapies for migraine and identified the delta opioid receptor as a promising target for this disorder. Ongoing studies in her lab are focused on the differential role of mu and delta opioid receptors in headache. Additionally, her work focuses on identifying the molecular mechanisms that contribute to migraine chronicity, as well as overlapping mechanisms between migraine and neuropsychiatric conditions. 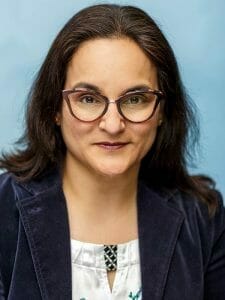 In this podcast, Pradhan speaks with Fred Schwaller, PhD, a freelance science writer based in Germany, to chat about the promise of targeting delta opioid receptors as a way to treat migraine – without the adverse consequences of current drugs that target the mu opioid receptor (another main subtype of opioid receptor.) She also discusses her recent work on neuronal complexity (see MSC related news article), her thoughts about the migraine field more broadly, and more.

Listen to the podcast below. (The podcast is also available on Spotify and Apple Podcasts.)

Cytoarchitecture: The structural arrangement of neurons.

Cytoskeleton: A network of protein filaments in the cell cytoplasm that give cells their shape and internal organization.

Histone deacetylase 6 (HDAC6): A protein that destabilizes microtubules through deacetylation (see below).

Microtubule acetylation/de-acetylation: The addition or removal of a molecule called an acetyl group from microtubules.

Neuronal complexity: The length of neurons along with the number of neuronal processes, including axons and dendrites.