The Prevalence of Headache Disorders: A Data Visualization

This Migraine Science Collaborative data visualization depicts data from a recent study estimating the prevalence of headache disorders. It shows how prevalence varies across the lifespan, across men and women, and across different geographical regions. How different study methodological factors affect prevalence estimates is also shown.

Editor’s note:  Understanding the prevalence of headache disorders – the proportion of the population that has these conditions – is an important effort in the field, helping societies determine where their health needs are and to allocate resources accordingly.

A recent study, from a group led by Lars Jacob Stovner at the Norwegian University of Science and Technology and published earlier this year in The Journal of Headache and Pain, builds upon the well-known Global Burden of Disease study to provide updated prevalence estimates for headache disorders. A recent MSC news article covering the study summarized the findings like this:

“The group estimates that the global prevalence of an active headache disorder is 52%, meaning that one in two people reported some kind of headache in the past year. This estimate is higher than the most recent Global Burden of Disease estimate, published in 2019.

The authors also find that almost 15% of the world’s population have a headache on any given day, with almost half of those being a migraine headache. Roughly 5% had a headache at least 15 days a month. Migraine was also found to increase in prevalence over the years.

The study further reveals that a number of methodological factors influenced prevalence estimates, though some of those factors were not significant.”

This MSC data visualization – our first, with many more to come – depicts some of the data from this important study, giving a sense of the scope of the problem of headache disorders, how these disorders affect the sexes differently, and how they impact geographic regions differently. The visualization also shows some specific study methodologies that can affect prevalence estimates.

See the data visualization below, which is based on data reported in the study by Stovner and colleagues. 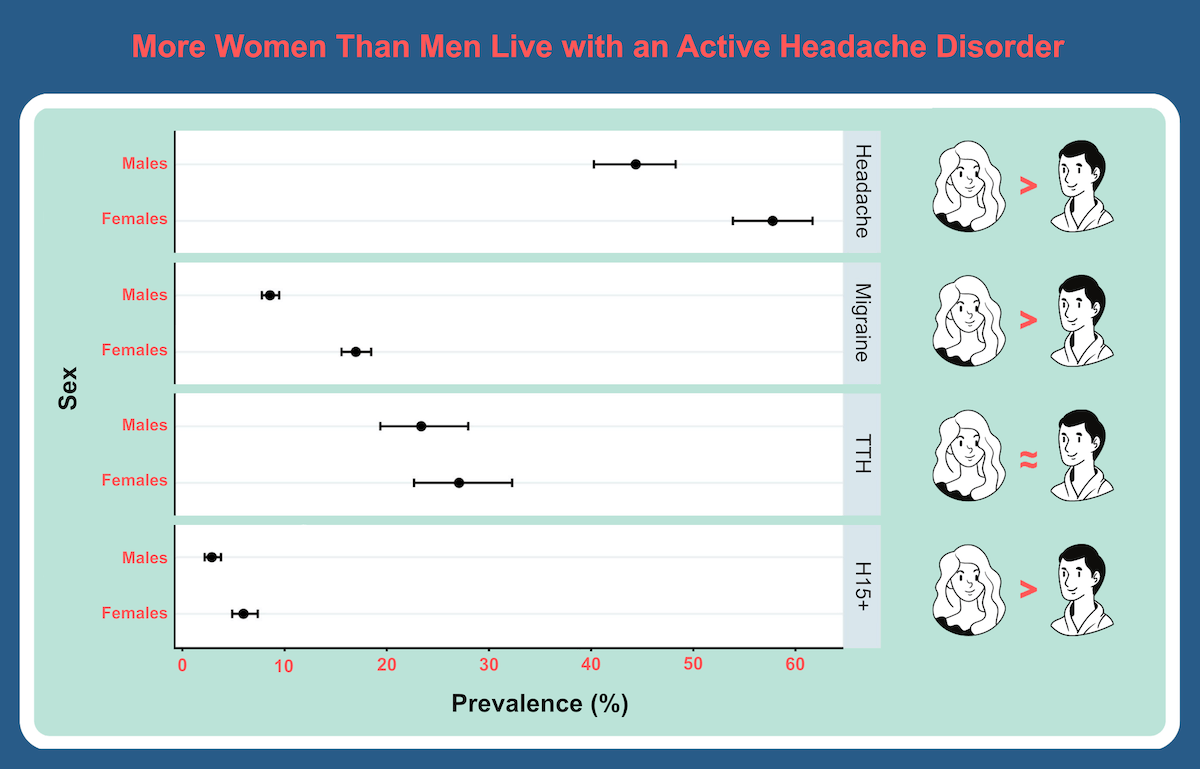 As the first panel of the visualization illustrates above, headache disorders are more common in women than in men. This applies to all headache, migraine, and headache on 15 or more days per month (H15+). There was no significant difference in women vs. men in the prevalence of tension-type headache (TTH).

The black circles in the panel represent the mean (average) prevalence, while the brackets depict the confidence intervals – a range of values depicting the uncertainty surrounding an estimate, in this case the estimate of the prevalence of headache disorders. 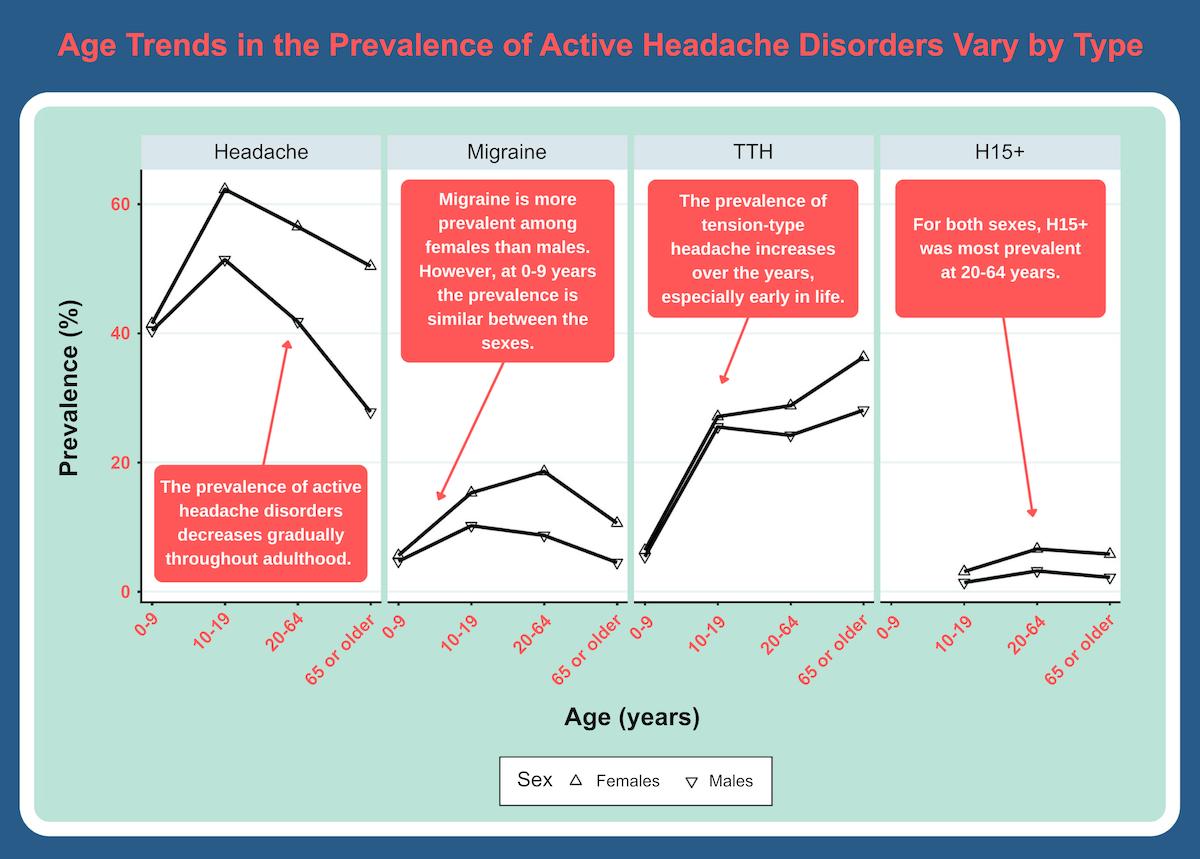 The second panel, above, shows how the prevalence of headache disorders changes throughout the lifespan in women and men. The nature of the change in prevalence over the years depends upon the type of headache under consideration – whether it’s all headache, migraine, TTH, or H15+. (Note: For both men and women, the prevalence of TTH was highest in those 20-64 years of age, with the exception of only a single study that looked at people over 64 years of age). 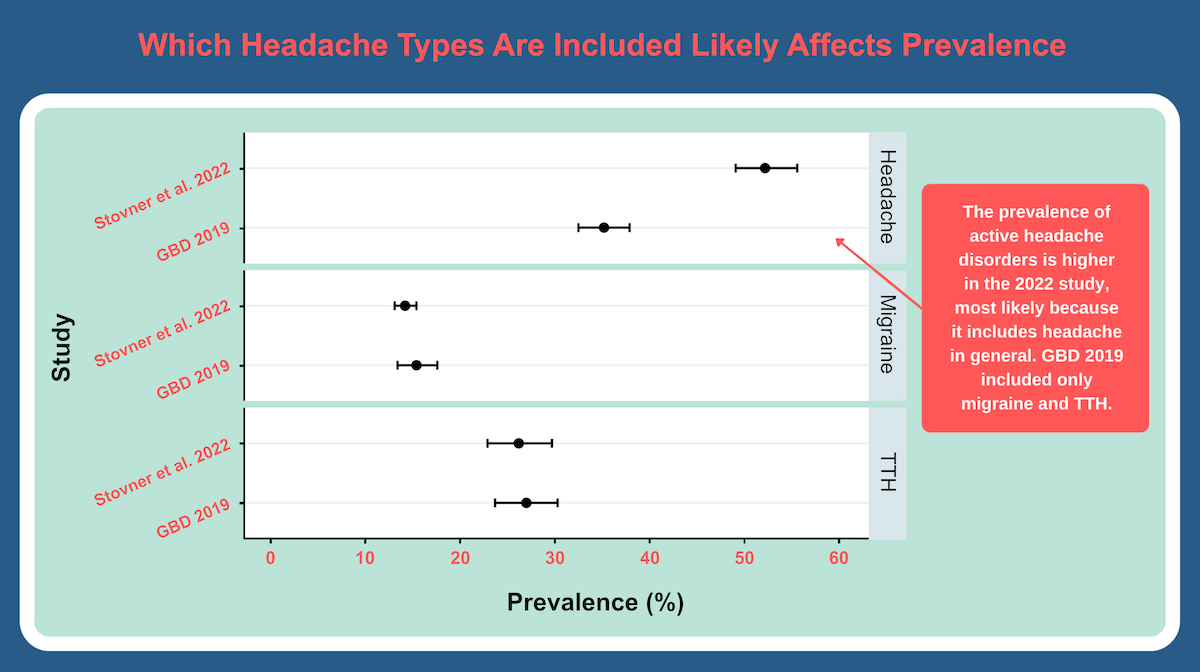 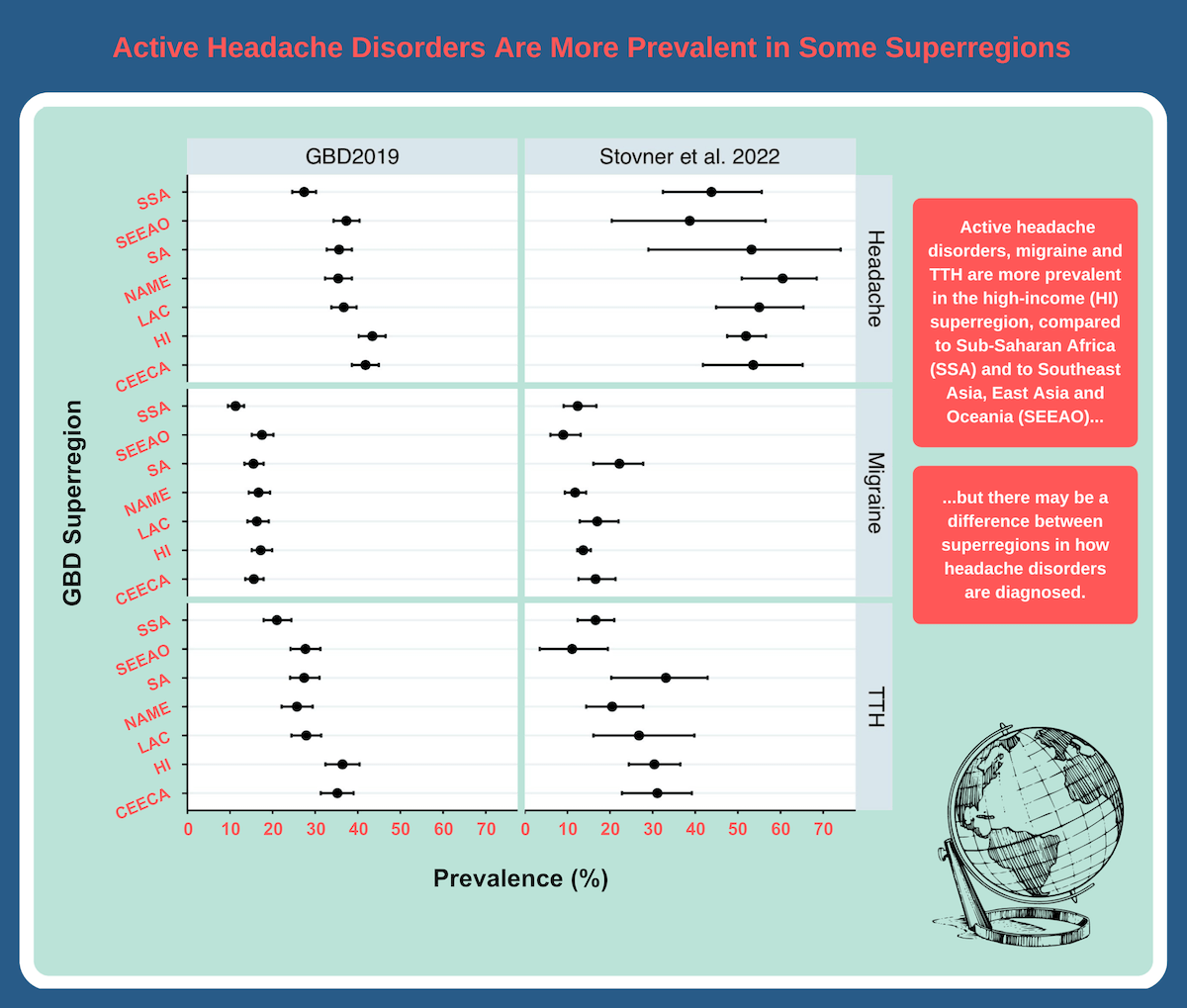 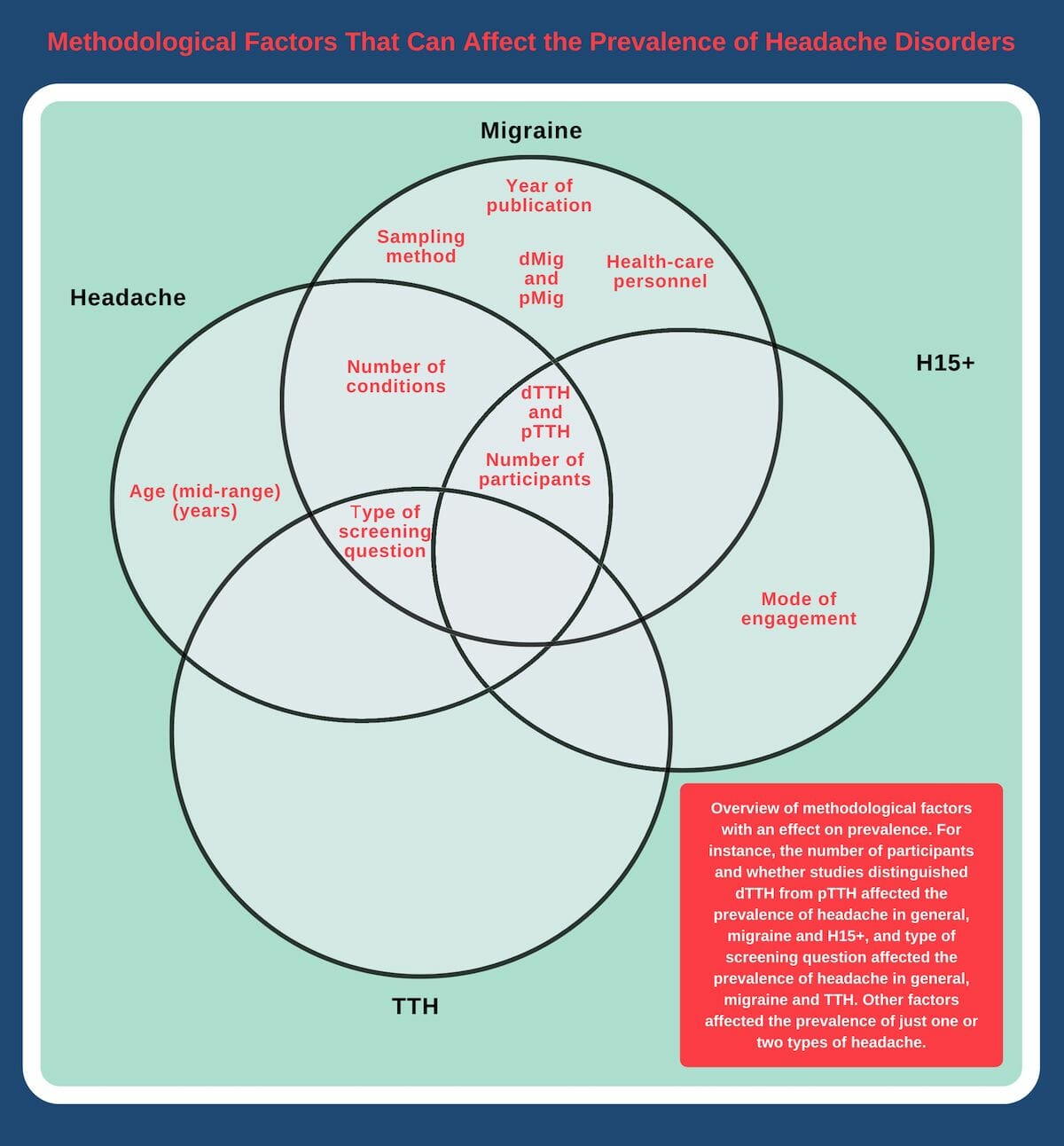 Health-care personnel refers to studies on medical students, hospital staff, and neurologists, while type of screening question refers to how studies asked subjects about their headaches. Mode of engagement refers to whether the interviews of study subjects were by telephone or face-to-face by untrained, trained or specialized interviewers versus a self-administered questionnaire or unknown mode of engagement. dMig: definite migraine. pMig: probable migraine. dTTH: definite tension-type headache. pTTH: probable tension-type headache.

Simona Frederiksen has a PhD in Health and Medical Sciences and lives in Calgary, Canada. Follow her on Twitter @sd_frederiksen

Simona Denise Frederiksen has a PhD in health and medical sciences and lives in Calgary, Canada. Follow her on Twitter @sd_frederiksen