Understanding the Links Between Migraine and Vascular Health

A new study finds that higher vascular risk scores are associated with lower chances of active or incident migraine.

Many studies show a link between migraine and an increased risk of cardiovascular disease. But the research literature is also full of contradictory findings in this area, making an understanding of the precise nature of the link elusive. The exact biological mechanisms by which migraine may affect the vascular system also remain uncertain. A new study now shows that these issues may be even more complex than is currently appreciated.

Using data from the long-running Women’s Health Study, researchers led by Tobias Kurth, of Charité-Universitätsmedizin in Berlin, Germany, found that a higher vascular risk score, in this case the Framingham Risk Score (FRS), was associated with a past history of migraine. But they also saw an inverse association of vascular risk with current migraine – the higher the vascular risk, the lower the odds that subjects would report migraine at study baseline. The inverse association also held up for newly reported migraine at study follow up.

These findings, the authors argue, show that researchers and physicians should pay attention to the entire life course of migraine when considering the relationship between migraine and vascular health.

Gretchen Tietjen, University of Toledo, US, an expert on migraine and its relationship to vascular health but who was not involved with the current work, said the findings were “thought provoking.”

“This is a research group that has done a lot of other studies on vascular health and migraine. They often look at this association from a novel perspective that makes their papers particularly interesting,” she said. “The results suggest one needs a healthy vascular system in order to have active migraine, which calls into question the role of the artery in generating migraine. But they also found that a past history of migraine is associated with a higher FRS. It raises a lot of questions about what happens to the vascular system as we age, and how those changes might relate back to migraine.”

In a related editorial, Simona Sacco, University of L’Aquila, Italy, and Luciano Sposato, Western University, London, Canada, commended the researchers for their work.

“The large Women’s Health Study cohort and sound regression models are strengths of this study, which adds an important contribution to the understanding of the association between vascular risk status and migraine activity,” they wrote, referring to the statistical analysis performed by the investigators. “Migraine is a neurovascular disorder, and the study suggests that a healthy vascular system is associated with migraine occurrence.”

The study and editorial appeared October 18, 2022, in Neurology.

Setting up a study to better understand the migraine-vascular health link
Kurth, along with first author Khatera Ibrahimi, Erasmus MC, Rotterdam, the Netherlands, and colleagues said they were interested in looking at the “paradoxical” relationship they had previously observed between cardiovascular disease and migraine in their research, as well as in other studies in the literature. For example, as they noted in their paper, studies show that a link between migraine and ischemic stroke is stronger in people with lower vascular risk, but the previous research does not show the same relationship for heart attack; instead, the risk for heart attack was only seen in those with higher vascular risk.

“The FRS is a well-established summary measure to assess an individual’s vascular health. It’s one of the most used tools and well-working tools,” he said. “So we wanted to use it as a proxy measure for vascular health as we looked at migraine status.”

The FRS is a predictive score that estimates the risk of coronary heart disease within the next 10 years. It includes a variety of factors including age, total cholesterol, high-density lipoprotein cholesterol, smoking history, and systolic blood pressure.

The researchers used previously collected data from the Women’s Health Study. This is a long-running, initially randomized controlled trial that originally looked at whether low-dose aspirin and vitamin E could prevent cardiovascular disease and cancer in female healthcare professionals over the age of 45. The current study would include blood sample data as well as questionnaire responses from 27,539 women from the Women’s Health Study to determine each person’s FRS.

The investigators stratified the study participants into four distinct risk groups based on their FRS score: A risk of less than 1%, 2%-4%, 5%-9%, or greater than or equal to 10%. The team also divided the participants into four migraine groups: No migraine; a history of migraine (having migraine in the past but no episodes in the year prior to study enrollment); migraine at baseline (at least one migraine attack in the year before study enrollment); or incident migraine (no history of or active migraine at baseline but a migraine attack during the follow-up of the study). All of these categories were based on participants’ self-report of migraine.

The researchers then analyzed the data using statistical models to look at the relationship between FRS and migraine. Here, they calculated an odds ratio (OR) – the odds of having a migraine in those in the three higher FRS groups, compared to people in the lowest FRS group and without migraine. The team would adjust the ORs for body mass index, diabetes, and other factors that could affect the results.

Much to consider
The results indicated that the adjusted odds of having a history of migraine at baseline (versus no migraine) were 76% higher in participants in the highest FRS group, compared to those in the lowest FRS risk group (an OR of 1.76).

But those in the highest FRS risk group had 36% lower odds of having migraine at baseline (an OR of 0.64), and 58% lower odds of newly reported migraine during follow-up (an OR of 0.42), compared to those with the lowest FRS. The researchers saw similar inverse patterns when looking at the middle two FRS groups.

Kurth said the results did not surprise him.

“We’ve seen many hints of this in other studies, and I’ve been working with this kind of data for many years. We hypothesized that there would be this kind of relationship between the state of migraine and FRS,” he said.

Kurth continued, “This shows researchers and doctors that we really need to think about migraine and associated risks across the life course. There appear to be different phases of migraine during the life course, and these different phases may include patterns of symptoms that have been overlooked. We need to consider this to help us better explain this relationship between vascular health and migraine.”

Tietjen agreed with Kurth, adding that it would be interesting to take a closer look at the relationship between vascular health and migraine with aura specifically. This is because that migraine subtype has stronger ties to vascular health than migraine without aura. She also noted the study did not include men.

“These are both study limitations that the authors openly talk about in the paper,” she said. “They also note that we need studies where we can follow migraine over time so we can truly understand what’s going on. I agree. But, as a physician, I read this paper and thought, if a patient comes to me and says their migraine has stopped, I better be screening them for heart disease. There’s a lot to think about here.”

Importantly, the study authors also caution that their results don’t say anything about whether there is a causal relationship between the FRS and migraine, but they do point to potential biological mechanisms that could underlie the relationship. This includes changes in arterial stiffness in those with a history of migraine, and issues related to microvascular (small vessel) function. It’s also possible, they say, that there may be other vascular characteristics of people with migraine that are not captured by the FRS.

Kurth said he hopes the results of the study inspire other researchers to collect information on migraine and cardiovascular factors in their future work.

“We need to continue to collect information on migraine over time because it’s something we hardly have available in current data sets. It is also important that we look at changes in the cardiovascular risk profiles,” he said.

Kurth continued, “It would be interesting to have data sets where we can look at people who are only starting to have migraine and then follow them over time to better understand the association between vascular health and migraine and what might be driving it. The mechanisms may differ in different people. But if these data are correct, and people with migraine have a healthier vascular system, the big question becomes, at what point does the vascular system change? Does it change at all? Are there differences between younger and older age groups? It’s challenging to get this kind of data, of course, but I think it’s definitely worth doing.”

Kayt Sukel is a freelance writer based outside Houston, Texas. 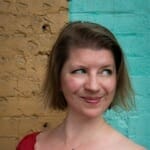 Kayt Sukel is a passionate traveler and science writer who has no problem tackling interesting (and often taboo) subjects spanning love, sex, science, technology, travel and politics. Her work has appeared in the Atlantic Monthly, New Scientist, USA Today, Pacific Standard, the Washington Post, ISLANDS, Parenting, the Bark, American Baby, National Geographic Traveler, and the AARP Bulletin, among others. She has written stories about out-of-body experiences, artificial intelligence in medicine, new advances in pain treatments, and why one should travel to exotic lands with young children.

She is the author of two books: Dirty Minds: How Our Brains Influence Love, Sex, and Relationships (re-titled as This Is Your Brain on Sex: The Science Behind the Search for Love in paperback) and The Art of Risk: The New Science of Courage, Caution, and Chance.